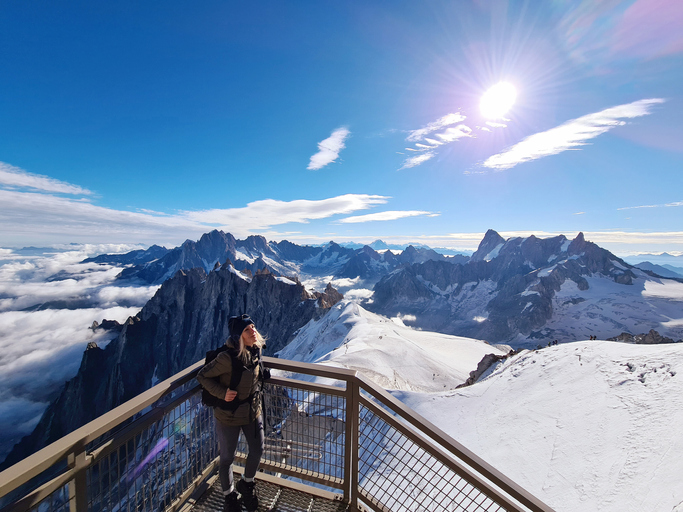 Organic matter is prevalent in today’s atmosphere over different continents, but its source is still poorly known.

Studying organic material trapped in ice cores is one way to understand this better. Researchers at the Arctic and Antarctic Research Institute in St Petersburg, Russia, and the Laboratoire de Glaciologie et Géophysique de l’Environnement (LGGE) in Grenoble, France, have investigated this by reviewing the available data and conducting analyses on the dissolved or total organic carbon (DOC or TOC) content in snow and ice from Antarctic, Greenland, and Alpine ice cores.

Carbonaceous matter – elemental (EC) or black carbon (BC), and organic carbon (OC) – is recognised as a major constituent of the present-day atmospheric aerosol load over continents, but there is still not enough knowledge of its origins. OC accounts for approximately 75 % of continental atmosphere aerosol. Of this, there are more water-soluble than water-insoluble fractions of OC (WSOC and WinOC respectively). The chemical nature of gaseous precursors and the mechanisms involved are not well known either, and so atmospheric OC aerosol concentrations are underestimated.

The variability and contributions of natural (for example, vegetation emissions) and anthropogenic sources (such as fossil fuel combustion) to OC aerosol in our changing atmosphere, from the pre-industrial era to the present day, can – to some extent – be highlighted by snow and ice core studies. However, no critical review had been conducted to understand the causes of the large differences in DOC or TOC content between snow and ice. Researchers at the Arctic and Antarctic Research Institute and the LGGE thoroughly examined the available data and completed their own data set by analysing selected samples from Antarctic, Greenland, and Alpine ice cores.1

The snow sampling was done using a glass scraper that had previously been washed with ELGA® ultrapure water of resistivity of 18.2 MΩ/cm, prepared using a PURELAB system. Airtight glass bottles, cleaned by rinsing several times with ELGA water, were used to collect the snow samples. Atmospheric WSOC aerosol samples were collected over a year from a set of high-volume filters at Concordia, located on the high East Antarctic Plateau. To reduce contamination by organic material, each filter was extracted with ELGA water.

An automated TOC analyser – with a modified UV persulfate method – was used for the precise analysis of small sample volumes to quantify the DOC or TOC content and ions in aerosol, polar ice sheet, surface snow and snow pit samples from Antarctica and Greenland, as well as at a high-elevated site in the French Alps. This, combined with following a detailed sampling protocol, helped to eliminate any inconsistencies in results. Any inorganic carbon (dissolved CO2, HCO3−, and CO32−) was removed in an inorganic carbon cell before the liquid sample was transferred to a UV reactor cell. The organic carbon was oxidised to CO2, which was then detected by non-dispersive infrared (NDIR) analysis. Ancillary chemical analysis was also conducted to detect a range of cations and anions present in the samples.

The review of the available data found that the large inconsistencies were related to contamination problems during sampling and storage of snow, as well as degradation of the ice quality. The different methods – UV and combustion – in oxidising insoluble OC material present in samples did not contribute to this. The data revealed that the typical annual pre-industrial DOC ice content is between 5-10 parts per billion as carbon (ppbC) in Antarctica, 20 ppbC in Greenland, and 70 ppbC in the Alps. C1-C3 monocarboxylic acids and formaldehyde represent the most important water-soluble atmospheric organic gases that contribute to the OC content of ice. C2-C5 dicarboxylic acids, humic-like substances, and sometimes methanesulfonate were found to contribute to the WSOC quantity, but a large fraction of the WSOC was not chemically identified.

The Alpine OC was found to be three times higher in the 1970s and 1980s compared to before World War II, but a major fraction of WSOC is biogenic in origin. The increased biogenic emissions of atmospheric WSOC are a result of warmer temperatures, higher atmospheric CO2, and enhanced oxidative capacity of the atmosphere. The increasing trend of OC in Greenland, on the other hand, is explained by the level in pre-industrial ice and, in recent years, the levels in the snow collected. The Antarctic data collected suggest a significantly lower level of OC during the Ice Age compared to the Holocene, which is explained by the decreased continental biogenic emission during colder and drier conditions.

The improved protocols for sampling and analysis in this study can be applied for future investigations to better quantify organic carbon in snow and ice, as well as in other materials, but also emissions in different locations around the world. This will give scientists a better insight into the different sources and their relative contributions to the changes in our environment and the atmosphere.

Why Choose ELGA LabWater in France?