What is Activated Carbon?

Activated carbon is a granular material produced mostly by roasting charcoal from coconut shells or coal at 800 to 1000°C to “activate” it.   Impurities are removed by acid washing. Typically, it has pore sizes ranging from 500 to 1000nm and a surface area of about 1000m2/gram. A much purer form of activated carbon is produced by pyrolysing polymer beads.

What does Activated Carbon remove from water?

How does Activated Carbon work?

Activated carbon reduces free chlorine to chloride and carbon dioxide. It also breaks down chloramines by a relatively slow catalytic reaction to produce ammonia, nitrogen and chloride. Organic compounds are adsorbed in the pores of the carbon matrix. The large surface area of the activated carbon enables significant quantities of organic material to adsorb through ionic, polar and Van der Waals forces.

The very large surface area of activated carbons provides ideal growing areas for bacteria. Adding a bactericide, such as silver, has been used to minimise this effect but the carbon cartridges need to be changed regularly to keep bacterial build-up and shedding under control.

What are the benefits of Activated Carbon?

High purity activated carbon is a highly effective adsorber of organic compounds and is used to remove residual organic compounds in purified water. These may come from the feed-water or leached from the system or the ion exchange resins. It is a valuable aid in maintaining low TOC values, complementing UV oxidation.

The affinity of activated carbon for organics can also be used in vent filters to protect reservoirs of purified water. 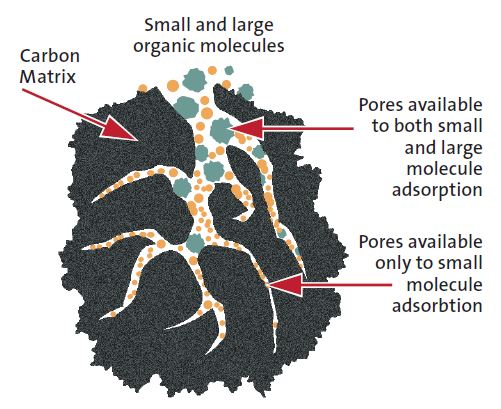 How does ELGA LabWater use Activated Carbon?