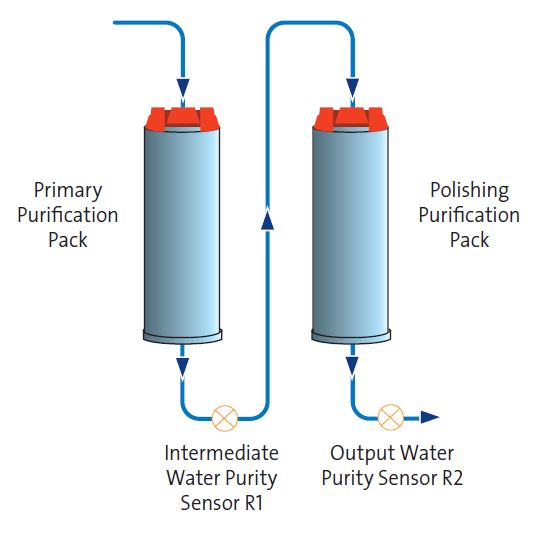 PureSure® is an enhanced process for removing impurity ions from water using ion exchange (IX) resins. It uses a double purification pack and monitoring system to ensure the absence of ionic impurities in purified water to levels below that detectable using conventional resistivity measurements.

What does PureSure® remove from water?

IX  cation and anion resins contain positive and negative functional groups in the hydrogen and hydroxide forms respectively. These ions are exchanged for inorganic impurities as the water flows across the resin beads. IX resins are highly effective at removing impurity ions from water but as the resins start to become saturated with impurity ions the ions are not retained as strongly and start to be released into the product water. The pack of resin needs to be exchanged. If you wait until the product water resistivity falls, significant numbers of impurity ions will already be present in the product water. This is particularly the case for weakly charged impurities such as organic acids, boron and silicon ions, which can elute at relatively high levels into the purified water without standard resistivity monitors in the product water detecting them.

To avoid this, with PureSure® the resin pack is split into two packs and a resistivity monitor (R1) fitted between the packs. As the first pack exhausts the resistivity at R1 starts to fall. However, any ions released by this primary purification pack are retained strongly by the second pack. When the first pack is sufficiently exhausted, it is discarded and recycled, the second pack is moved to the primary position and a fresh pack fitted in the second position. Throughout the resistivity at R2 is maintained at 18.2 MΩ.cm.

What are the benefits of PureSure®?

PureSure® ensures the effective operation of the IX resin packs and avoids the release of weakly held ions from the IX resin into the product water. In effect, it guarantees the ionic purity of the product water. By maximising the use of the resins in the first pack PureSure® also can increase the usable capacity substantially with cost and environmental savings.  As the second pack prevents the release of impurity ions you can choose to continue working temporarily with the old pack still installed until a replacement pack is purchased.

How does ELGA LabWater use PureSure®?

ELGA was the first company to use PureSure® technology in laboratory-scale water purification and continue to make optimum use of this approach. It is fitted in many products in the ELGA range.