What is Ultraviolet Light?

Ultraviolet (UV) is a form of electromagnetic radiation with wavelength from 10 to 400 nm, shorter than that of visible light, but longer than X-rays. Low pressure UV lamps can be made using a fluorescent lamp tube with addition of mercury. These lamps emit ultraviolet light with two main peaks in the UVC band at wavelengths of 253.7 nm and 185 nm due to the mercury within the lamp, as well as some visible light. From 85% to 90% of the UV produced by these lamps is at 253.7 nm and about 5–10% is at 185 nm. For use in water purification a synthetic quartz housing is used to minimise absorption of the light at 185nm passing from the lamp into the water .

What does Ultraviolet Light remove from water?

UV prevents micro-biological growth and also removes organic compounds by oxidising them to acidic species and ultimately to carbon dioxide. These ionic species are removed by down-stream ion exchange resin. Ultraviolet can also be used to remove chlorine and chloramine species from the water.

How does Ultraviolet Light work? 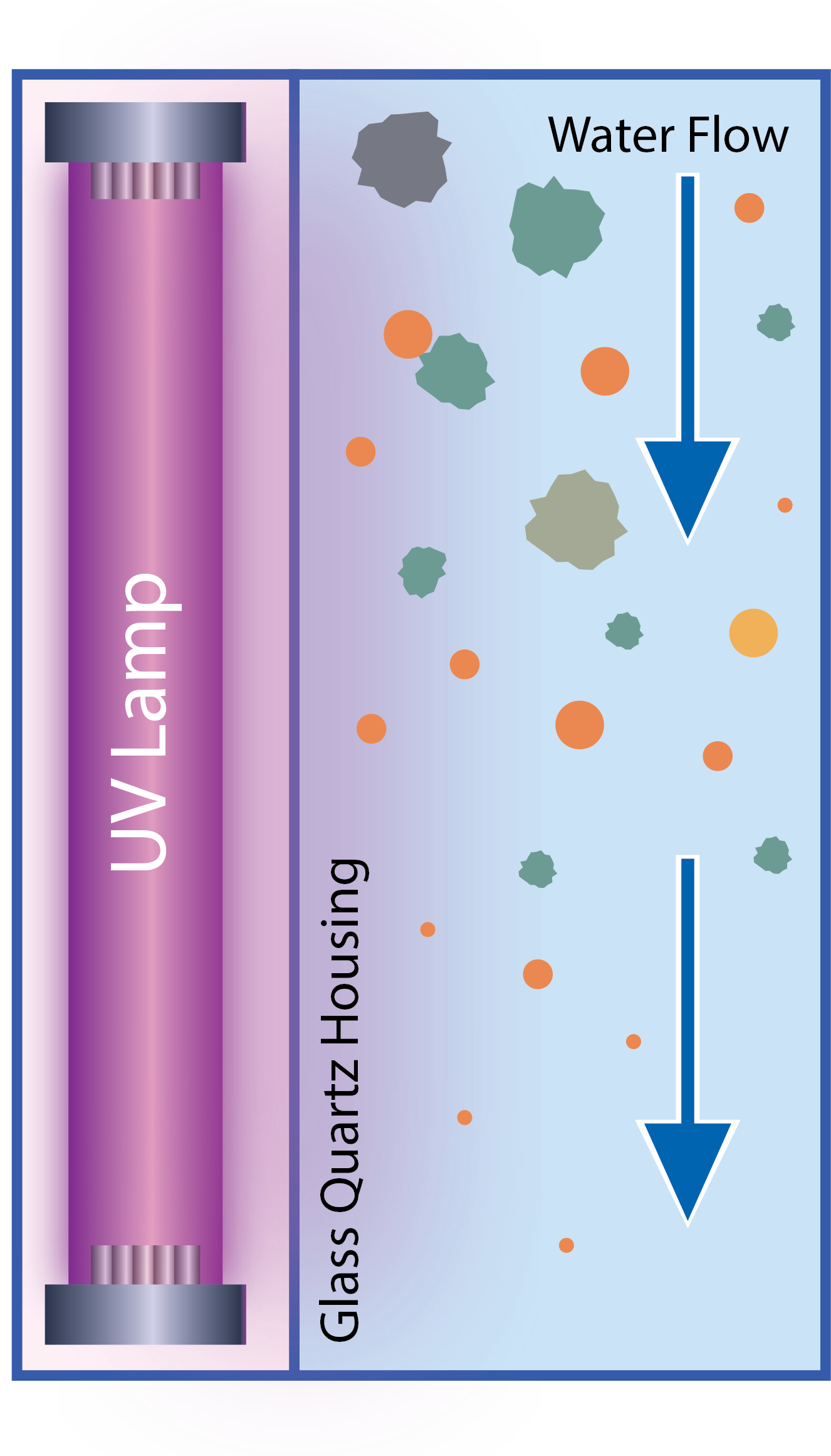 A UV chamber typically consists of a UV lamp mounted in a quartz tube in the centre of a stainless steel tube; water flows through the zone between the quartz and steel tubes. UV affects the impurities in the water in two different ways. UV light at 253.7nm has a strong bactericidal action as it damages DNA and RNA polymerase at low doses preventing replication; higher doses are biocidal. Light at 185nm has a strong oxidising action which breaks down large organic molecules into smaller ionized components and ultimately carbon dioxide. These components are then removed downstream by high purity ion exchange resin beds.

What are the benefits of Ultraviolet Light?

Exposing water to sub 200nm wavelength UV light followed by ion exchange is by far the most effective way of removing the last traces of organic contamination from water; UV light at about 254nm is also a very effective bactericide. It has the major advantage that it is largely maintenance-free except for annual lamp replacement and the water only contacts the quartz sleeve surrounding the lamp, minimising contamination.

How does ELGA LabWater use Ultraviolet Light?

In ELGA systems, typically, the UV treatment forms part of a 'polishing' loop including ion-exchange and filtration, through which water is repeatedly circulated to maintain quality. Ultraviolet (UV) light is used, as described above, to inactivate microorganisms and photo-oxidise organic impurities. Prior removal of UV-absorbing species and organic ions by reverse osmosis and ion exchange is used to optimize the effectiveness of this technology in water purification. Using these technologies and point-of-use filtration a PURELAB Chorus 1 can produce water with Total Organic Carbon (TOC) of <3 ppbC and bacteria at <0.001 CFU/ml.