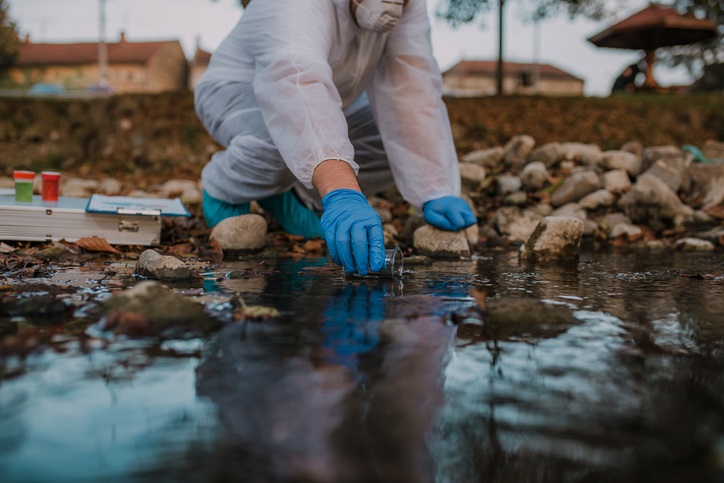 The availability of more and more sensitive multi-component analytical techniques has raised the possibility of monitoring human (and other) activities by analysis of collective waste.

A topical example is the potential detection of Covid 19 antibodies in waste as a means of early warning of an increase in cases in a locality1. Other substances sought include illicit drugs2 and caffeine, nicotine, flame retardants and plasticizers3. A more general application is illustrated by the recent work by Kadokami and colleagues4 who studied the levels of 484 chemicals including 162 pharmaceuticals and personal care products (PPCPs) in daily use.

Chemicals that are used domestically and in commercial and business properties are eventually discharged to the sewerage system and reach municipal wastewater treatment plants (WWTPs). Thus, the local release of such chemicals can be determined by examining their concentrations in the inflows and outflows of WWTPs. (an approach known as wastewater-based-epidemiology (WBE)). They sampled at eight waste treatment plants across Japan to obtain data on levels of these chemicals produced by various communities and any seasonal variations, to identify markers of sewage contamination and to assess the efficiencies of their removal during sewage treatment with a view of protecting the aquatic environment. The table summarises the range of materials sought and found.

24-h composite samples were collected at points before and after treatment from all eight sites four times over a year. Samples were stored cold and extracted the same day. The solid-phase extracts were washed with ultrapure water, dried by nitrogen and eluted with methanol and dichloromethane. Mixed internal and matrix standards were added and chemical concentrations were determined using LCQTOF-MS (quadrupole time-of-flight mass spectrometry). For 85% of the chemicals found the method detection limits were below 8 and 2 ng/L for inflow and outflow, respectively. The target compounds were identified using the mass accuracies of a precursor and product ions, their ratios, and retention times. Quantification of the identified target substance used six internal standards. An ELGA PURELAB Chorus 1 provided the ultrapure water used.

87 out of the 484 daily-use chemicals sought were detected in the inputs to the WWTPs with an average total concentration of 0.1 mg/L. Pharmaceuticals made up 50% of the total. The individual substances found at the highest concentrations were the pharmaceuticals metformin, theophylline and theobromine, the sweetner sucralose, the brightening agent  distyrylbiphenyl disulfonate (FB351) and the surfactant N,N-Dimethyldodecylamine N-oxide. Removal efficiencies in the WWTPs were low, at only 29% for pharmaceuticals and 20% for pesticides. Seasonal variations could be detected with the levels of sucralose, UV-filters and insecticides higher in the summer while ibuprofen and chlorpheniramine were higher in the winter. 22 substances were identified which could serve as markers for sewage contamination.

The work of Kadokami et al. illustrates perfectly the need for and the benefits of ultrapure water generated on-site by a water purification system designed to consistently produce pure water with undetectably low levels of a very wide and diverse range of impurities. Use of UPW is fundamental to the analytical sequence and the affect of any interfering impurity in it could be significantly amplified. Looking for nearly 500 different compounds, they could report with confidence on their absence or, when detected, quantify sub 10ng/L concentrations. They chose ELGA LabWater’s Chorus 1 because it provides a proven ultrapure water purification system with extremely low levels of all types of impurities that they could rely on.