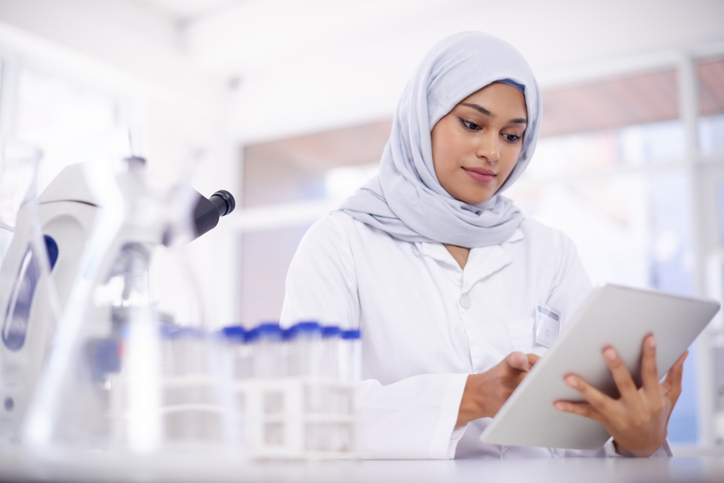 Drug interactions with bovine serum albumin (BSA) provide valuable insights into a compound’s pharmacokinetic and pharmacodynamic properties, which are crucial to drug development. Researchers at King Saud University, Saudi Arabia, have been using spectrophotometric and molecular modelling studies on BSA and linifanib (LNF) to better understand their use in anti-tumour therapy.

Receptor tyrosine kinases (RTKs) are signalling proteins that play a key role in regulating the spread and growth of cancer cells, making them a target for oncology drug development. Inhibiting the combined activity of two particular RTKs – platelet-derived growth factor receptor and vascular endothelial growth factor receptor – leads to higher anti-tumour activity than inhibiting either receptor alone, creating a need for drugs that can specifically target both without affecting other RTKs. LNF is just such a compound, and this potent inhibitor is currently the subject of several clinical trials.

Human serum albumin (HSA) plays a critical role in the transport of drugs such as LNF around the body; a compound’s rate and volume of distribution volume, and subsequent elimination is highly dependent on how it binds with HSA. Because of the difficulties in obtaining sufficient quantities of HAS for research, BSA is commonly used as a substitute, due to its similar molecular structure. Researchers at King Saud University, Saudi Arabia, therefore looked at the in vitro biophysical interactions of BSA and LNF to improve the understanding of their in vivo storage, pharmacokinetics and transport mechanisms.

The research involved both experimental and computational approaches. Stock solutions of LNF and BSA were prepared, and then standard solutions derived by diluting with a phosphate-buffered saline solution prepared using Type IV water from an ELGA LabWater purification system. Fluorescence emission spectra (300-500 nm range with a 280 nm excitation wavelength) were recorded at temperatures of 15, 27 and 35 °C, with a fixed BSA concentration of 1.5 µM and varying LNF concentrations (0.0, 1.6, 2.4, 3.2, 4.8 and 6.4 μM). UV-Vis spectra (200-400 nm range) were also measured for the same combinations of BSA and LNF, as well as reference solutions to discount absorbance due to LNF.

BSA has two binding sites – site I and site II. The LNF binding site on BSA was determined through separate competition experiments using site mixtures of BSA/diazepam and BSA/warfarin, as diazepam and warfarin are specific probes for sites I and II respectively. Molecular docking software was used to simulate the spatial interactions between LNF and BSA, and to corroborate the experimental data in determining the LNF binding site, the nature of the interactions and structural variations on binding.

BSA has intrinsic fluorescence that is quenched on binding to LNF. The intensity of the BSA fluorescence decreased as the LNF concentration increased, showing that static, rather than dynamic, quenching of the fluorescence occurred. In addition, an isosbestic point at 387 nm indicated that an equilibrium was formed between the LNF-BSA complex in a 1:1 ratio. The calculated binding constants for 15, 27 and 35 °C ranged between 2.0 x 104 and 4.3 x 104 l/mol, reflecting a strong binding interaction, and the binding site number was approximately unity.

In the site marker competition experiments, the LNF-BSA room temperature binding constants were 1.4 x 103 and 5.3 x 103 l/mol in the presence of diazepam and warfarin respectively. These results indicated that there was greater site competition at site II with diazepam, and additional computational modelling was used to determine that the LNF binding site of BSA was sub-domain IIIA on site II. Negative values for 𝞓H and 𝞓S were obtained through thermodynamic analysis, suggesting that hydrogen bonding and van der Waals forces account for the binding interaction in the LNF-BSA complex. In addition, the negative value for 𝞓G indicates that the complex formation is spontaneous.

The binding strength between a drug and HSA determines the free drug plasma concentration, distribution and elimination, all of which correlate to the therapeutic activity of the drug, as well as any possible side effects. The binding strength can also be a helpful factor in deciding on appropriate drug dosage. The results of these experimental and molecular docking studies can play a significant role in supporting improved LNF-derived drug development in the continuing battle to beat cancer.

The presence of impurities in laboratory water can be a major problem in research experiments, and can seriously compromise results. ELGA LabWater has been a trusted name in pure and ultrapure water since 1937. We believe in giving you choice in how you use our water purification solutions, supported by excellent service and support. For more information, check out our wide range of water purification systems, including the PURELAB Quest, PURELAB Chorus 1 Complete and our PURELAB Flex models.