Ice Cores in the Caucasus – A Mirror on Human Activities 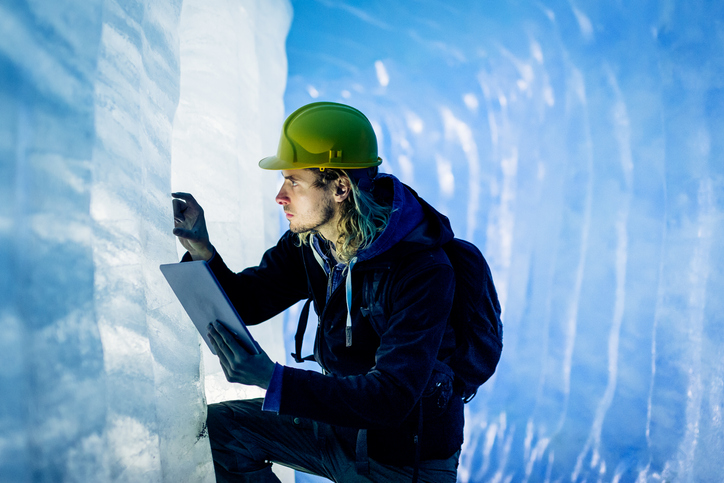 Ice cores from many parts of the world have been analysed in detail to provide time-related data on changes in the global environment.

To study the so-called “Great Acceleration” – the great increase in global effects of recent human activity - Carlo Barbante1 and an international team have used measurements of fragrances, as markers for novel personal care products, and polycyclic aromatic hydrocarbons (PAHs), as industrial markers, in an ice core from the Caucasus to study the changes and correlate them with the events of the 20th century.

A 182 metre long ice core was taken from the upper slopes of Mount Elbrus, the highest mountain in the Caucasus in 2009. It was analysed at the time for major ions, stable isotopes and black carbon. This recent work analysed the cores, covering the period of deposition from 1930 to 2005, for fragrances and PAHs. Sub-samples from four 1 metre lengths were combined to give 22 samples and a time resolution of between 1 and 5 years over the length of the core. They were extracted using a universal polymeric reversed-phase sorbent, which was then extracted with toluene followed by dichloromethane and finally n-hexane. After evaporation the combined extracts were analysed by GC-MS using single ion monitoring with a 60-m HP-5MS column. Ultrapure water from an ELGA LabWater PURELAB Chorus 1 was used in the preparation of containers and sampling equipment to prepare procedural blanks and standards.

17 fragrance compounds with suitable volatility and stability to be transported to remote areas were sought. The most widespread components found were amyl, benzyl and hexyl salicylates which are widely used globally due to their low price. The total concentrations of fragrances in the core increased by about ten-fold over the period studied with most of the change occurring after 1998. The proportions of the different fragrances remained much the same. PAH concentrations also increased over the 70 years studied but by somewhat less – about a factor of 5.

The concentrations of both black carbon and PAHs, which reflect levels of combustion, follow a similar pattern as does sulphate, consistent with increased coal combustion from Eastern Europe and the Middle East. Calcium, a proxy for dust, reflects more frequent droughts in North Africa and the Middle East due to changes in  climate and land use.

The deposits on Elbrus are influenced by prevailing westerly winds primarily originating from the Mediterranean and Eastern Europe. This is well illustrated in Figure 2 which shows the decreased concentrations of fragrances and PAHs associated with two periods of reduced human activity in Eastern Europe: the period of economic stagnation in the USSR in the 1970s and, most markedly, following the collapse of communism in the 1990s.

Due to their naturally low levels in the environment, fragrances have been found to provide a particularly sensitive marker for human activities.

The research teams at the University of Venice have long recognized that the analysis of unique samples, such as those found in ice cores, for a wide variety of trace components requires the best water quality – water of the most consistent high purity. They have successfully used ELGA water purification systems for many years for both trace elemental and organic analyses.  The validity of their research is critically dependent on water purity and their decisions to replace older ELGA systems with the latest generation of Chorus units reflects their confidence in the purity of the water produced and the technical support provided.