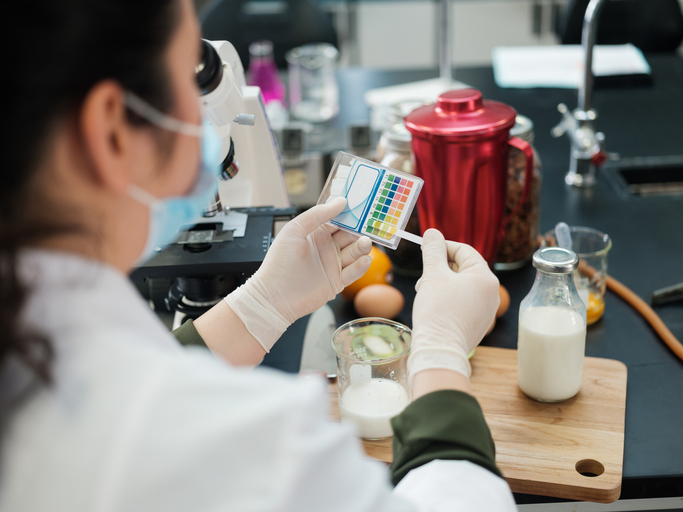 Milk is an excellent source of calcium, necessary for healthy teeth and bones. While cow’s milk is a popular choice, products are also available from other species. For example, buffalo milk is nearly twice as rich in fat compared to standard cow’s milk.

A Simple and Rapid Test

Lateral flow immunoassays (LFIA) can rapidly detect the presence or absence of a specific target substance. Already established as diagnostics tools, such as in pregnancy testing, these devices are increasingly being applied for food monitoring purposes.

An LFIA typically contains a control line to confirm if it is working, along with a test line. The device incorporates an antibody that specifically binds with the desired target – and a label, such as carbon nanoparticles, which can change colour under the right conditions. A positive result is read either by the absence or presence of a coloured line at the test line. Optimising the assay is important to make sure the label interacts correctly with the antibody and target, ensuring the reliability and accuracy of results.

In a new study, published in Food Chemistry, researchers set out to develop a rapid and sensitive LFIA that can detect the presence of buffalo’s milk in cow’s milk.1 The researchers raised specific antibodies against buffalo milk proteins. After purification, these were connected to carbon nanoparticles and then sprayed onto a pad. They designed the LFIA so that a grey/black colour would appear on the test line if a sample is free of buffalo milk.

The researchers evaluated the LFIA, showing the test line completely disappeared when buffalo’s milk was mixed into cow’s milk at a 5% level or higher. The team used ultrapure water generated from an ELGA PURELAB® laboratory water purification system, minimising the risk of adding contaminants that may affect the results.

In this study, an LFIA with carbon nanoparticles as the signal label was successfully developed for the detection of buffalo’s milk in cow’s milk. The sensitivity of the test is 5% adulteration of cow’s milk with buffalo’s milk.

The device is rapid as well as sensitive enough for use in real-world conditions, such as milk receiving stations. The test can even be applied to heated milk products, such as pasteurised milk.