Out Of This World: The Blue Planet

Water is essential to our life. We are not called the Blue Planet for nothing.

Whatever theory is believed on our lucky existence “God, Gaia or Goldilocks”, it is generally agreed that without water we would not exist. This series is going to have a look at various water reserves in some rather unexpected places; from the depths of our planet, out to the moon and Mars.

Before taking a journey through the universe, we will be looking at our own wonderful planet Earth.

A Rather Sparkling Discovery

What would you do if you found a diamond? Would you have it made into a beautiful ring or pair of earrings for a loved one? Or would you sell it to a group of geologists for $20 (it was only 3 mm wide) for them to then analyse it to their hearts’ content?

Diamonds (the more precious and visually appealing form of carbon which can be found in the lead of your pencil) are formed at great depths under specific conditions where there is great heat and pressure. Diamond-bearing rock is brought up to the surface from the lithospheric mantle through volcanic eruptions. The magma which feeds these eruptions has to have derived from a very deep source – it is heavily unlikely that you will be able to find a diamond in all volcanic rock, so you should think twice before booking your next trip to Iceland!

What Does This Have To Do With Water?

Another question for you to ponder over. What do you think of when someone says the word mantle? Apart from a cape, you would most likely think of a hot environment where the temperatures are so high that it would melt anything. That is true, but in this deep inhospitable environment there is also a water reserve so large that it is thought to be equivalent of 3 times the amount of water in our oceans.

A Fourth Phase Of Water

A team from the University of Alberta and lead by Dr Graham Pearson, have accidentally discovered a new mineral on Earth called ringwoodite while in Brazil looking for a different mineral. This very rare mineral, is a form of the commonly known peridot, but has some very interesting properties. The properties of the mineral make it capable of holding hydroxide ions within its structure. Experimental analysis of the sliver found within the $20 diamond, have shown that 1.5% of it’s weight is water. If, as predicted the majority of the transition zone (the area between the upper and lower mantle) is composed of ringwoodite, then you can do the maths. 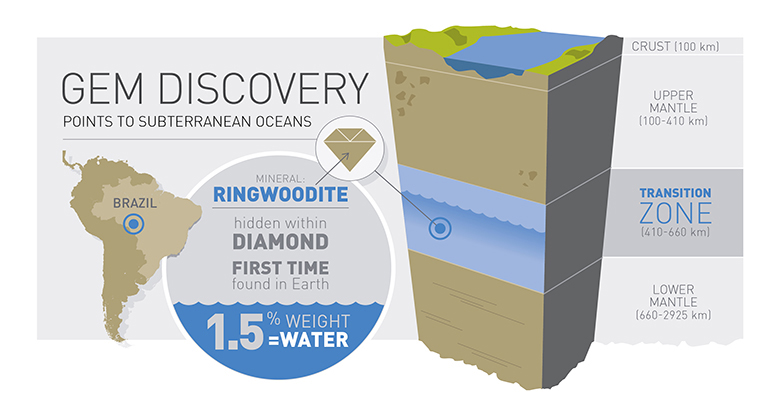 While it is nice to know that we have a seemingly infinite resource of water deep underneath our feet, the implications of this are important in understanding more about the flow mechanics of the rocks at depth. This in turn, may further help us to understand about plate tectonics, volcanism and the effects on our dynamic planetary system.

In the next blog, we will be looking at the studies for evidence of water on the Moon.