Multi-Component Scanning To Assess The Sources And Risks From Pollution 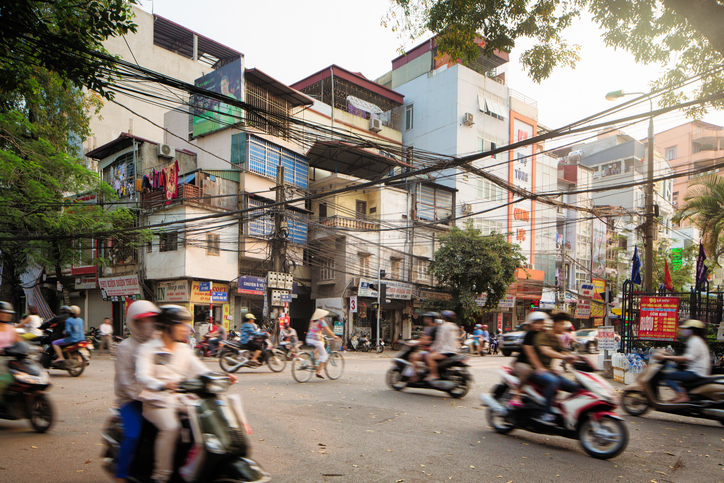 Occurrence and risk assessment of herbicides and fungicides in atmospheric particulate matter in Hanoi, Vietnam

Hanoi is a typical example of a major city in a rapidly developing country where a wide range of chemicals have recently started being produced and used (over 350,000 in Vietnam). Inevitably, air pollution has increased dramatically compounded by major increases in construction work and in the number of cars and lorries. The number of air quality standards has not kept up (44 in Vietnam) and there is now growing public concern about increasing air pollution, especially in big cities; however, little information is available on air quality, particularly regarding potentially hazardous semi-volatile organic compounds (SVOCs) adsorbed on atmospheric particulate matter. Although numerous pesticides are frequently applied across large cities in Vietnam, information on their concentrations in atmospheric particulate matter (APM) is limited.

H.T.Thuong and associates have used two different approaches (1,2). They determined the frequency and concentrations of 970 SVOCs in 48 air particle samples collected by means of high-volume air sampling in Hanoi by using a target screening method and a gas chromatography-mass spectrometry database. A total of 118 compounds (12.2% of the target compounds) were detected at least once in the samples, and the number of chemicals detected in each sample ranged from 85 to 103 (median, 92). Not surprisingly, for samples collected near a road with heavy traffic, the concentrations of target compounds in the samples were higher in samples collected during the day than in those collected at night, whereas the opposite was true for samples collected in a highly populated residential area with industrial activities related to the production of fresh noodles. Sixteen PAHs were detected at high concentrations in nearly 100% of the samples. Eighteen pesticides were detected, with permethrin being detected the most frequently (>70% samples), which can be explained by the use of permethrin-based Permecide 50 EC for dengue fever control during the sampling period. Endocrine-disrupting chemicals (i.e., bisphenol A, 4-nitrophenol) and pharmaceuticals and personal care products (diethyltoluamide, caffeine) were detected in over 90% of the samples. Seven sterols, five phthalate compounds and five organophosphorus flame retardants were detected in the samples.

Although numerous pesticides are frequently applied across large cities in Vietnam, information on their concentrations in APM is limited. Therefore, in a second approach, to investigate their occurrence and health effects, 187 pesticides in APM were screened using the liquid chromatography-mass spectrometry-quadrupole time of flight- Sequential Window Acquisition of All Theoretical Fragment Ion Spectra method (LC-QTOF-MS-SWATH). A total of 22 pesticides (16 fungicides and 6 herbicides) were quantified in the dry and rainy seasons. Among them, 19 substances were quantified in APM for the first time in Vietnam.

Their median total concentrations in the dry season were higher than those in the rainy season, and the concentrations in the daytime were one-third of the night-time concentrations in both seasons. Their total levels ranged from 0.82 to 21.1 ng m−3 (median, 3.63 ng m−3), the detection frequencies of 9 pesticides were higher than 70%, and 7–14 pesticides were detected per sample (median, 10). Some of the detected pesticides were likely sourced from their prevalent use in amenity turf protection (e.g., in parks and public roads) and weed control (e.g., in gardens, floriculture, and agriculture). The total daily intake (DIair) values for adults, children, and infants were 8.17E-06, 2.06E-05, and 2.45E-05 mg kg−1 d−1, respectively, and the highest Hazard Quotients (HQs) were 4.81E-04, 1.22E-03, and 1.44E-03, respectively. All HQs and HIs of the pesticides were < 1 for all population groups (adults, children, and infants), indicating negligible exposure risks.

Why choose ELGA LabWater in Vietnam?

H.T.Duong used ultrapure water from an ELGA LabWater PURELAB Chorus 1 for the work discussed above. In both cases multi-component detection and determination requires total confidence in the purity of the water used for sample and standard preparation and in the media for liquid chromatography. The same confidence is a major factor in the choice of an ELGA LabWater system.