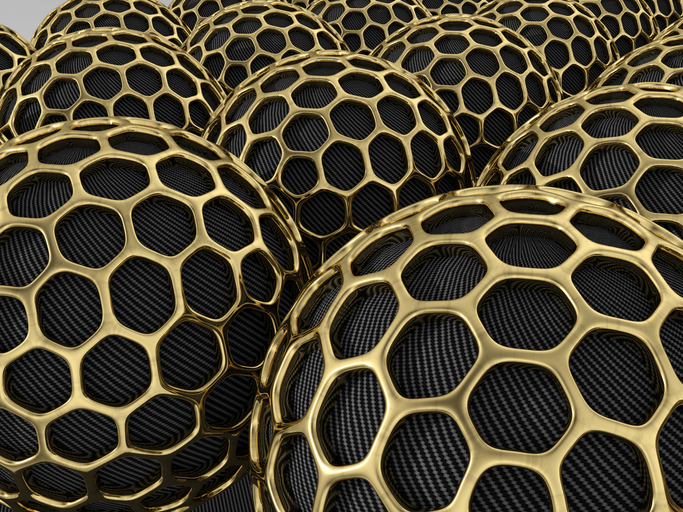 A new study demonstrates the potential of using ultrasmall gold nanoparticles for imaging or delivering drugs into the brain.

As its name suggests, the blood-brain–barrier provides a defence against any infectious agents and toxins that are in our blood. But one of the major challenges in finding cures for brain diseases – such as tumours, stroke and dementia – is that there is no truly efficient way to get treatments to cross it.

Nanoparticle delivery systems offer promising new opportunities for transporting drug molecules across the blood-brain–barrier. Due to their small size (<2nm), ultrasmall gold nanoparticles may be particularly well suited for transporting substances into cells.

In recent years advanced three–dimensional cell culture systems, such as multicellular spheroids, are emerging as powerful tools to test the penetration ability of potential therapeutics. In 3D brain spheroids, the blood-brain–barrier is simulated by the outer layer, which prevents the movement of drugs or particles from the growth media (the ‘blood’) into the core (the ‘brain’).

In a new study, published in Acta Biomaterialia, a team of researchers investigated the ability of ultrasmall gold nanoparticles to penetrate brain cells in a 3D brain spheroid model.1 The researchers prepared three different kinds of ultrasmall gold nanoparticles, each tagged with a different fluorescent dye to enable them to track their uptake into cells or spheroids using confocal scanning microscopy.

The team used ultrapure water generated from an ELGA PURELAB® laboratory water purification system for all synthesis and purification steps, minimising the risk of introducing contaminants that may affect their results. They first carried out 2D cell culture experiments to test the ability of their nanoparticles to penetrate three different types of cells that make up the brain (astrocytes, pericytes and endothelial cells) grown in the same dish. They found that all three kinds of nanoparticles readily entered all cell types. Two were even able to get inside the nucleus, the central part of the cell containing its DNA.

The team went on to create a 3D brain spheroid model from the same three cell types. They showed that after 120 hours, these self–assemble into spheroids with the core made up mainly of astrocytes, covered with pericytes, while endothelial cells form the outer surface.

They showed that all three types of nanoparticle were able to enter the spheroids, but dissolved unattached dye molecules did not. However, when they then added a substance that opened the outer layer of the spheroid, the unattached dyes were then able to get inside – proving the presence of a functional blood-brain–barrier.

In this study, the researchers successfully synthesised three kinds of fluorescent ultrasmall gold nanoparticles and proved they can penetrate brain cells grown in 2D and 3D culture.

Ultrasmall gold nanoparticles offer the potential to become an effective system for delivering small biomolecules and dyes across the blood-brain–barrier – offering the hope of more effective treatments for people with brain disease in the future.

ELGA has been a trusted name in pure and ultrapure water since 1937. Our dedication to ultrapure and pure water is a guarantee that we will continue to provide the best solutions with the best service.