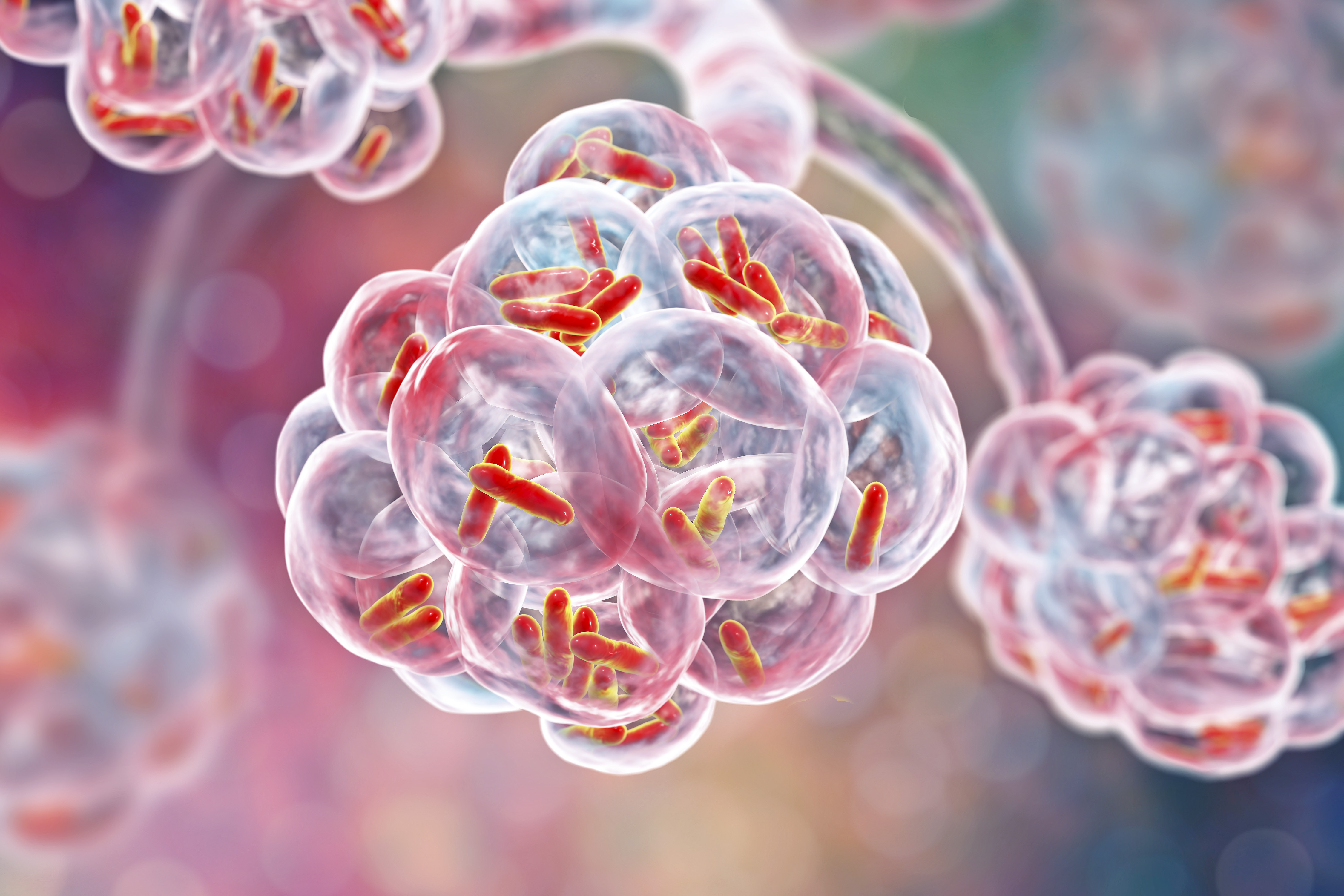 Tuberculosis (TB) is one of the top ten causes of death worldwide – and the emergence of antibiotic resistance is exacerbating the situation. New breathable powders that can deliver existing drugs directly to infected cells may offer hope for the future.

In 2017, ten million people fell ill with TB – and 1.6 million died from the disease. In the same year, there were an estimated 558,000 new cases of drug-resistant infections. New treatment strategies are urgently needed to improve this already drastic scenario. TB is caused by Mycobacterium tuberculosis (Mtb), which spreads through the air. If a person breathes in tiny aerosols containing the bacteria, these can penetrate deep inside their lungs. Immune cells called macrophages usually act as the body’s first line of defence by engulfing and destroying harmful pathogens. But instead, Mtb can infect, survive and multiply inside these cells – making the disease particularly challenging to treat.

People with TB are usually given a powerful combination of oral antibiotics over several months. But this provides an opportunity for drug-resistant strains to emerge, particularly as people often do not complete the full course of treatment. Combining antibiotics with other drugs known as efflux transporters can help shorten treatment, reducing the likelihood of drug resistance. These work by increasing the concentration of antibiotics within infected macrophages. However, they can cause serious side effects in other parts of the body, hindering their usefulness. Over recent decades, researchers have been searching for ways to deliver treatments straight into the lungs. By targeting drugs directly to the infected macrophages, this could increase their effectiveness, reduce the likelihood of resistance. While at the same time, protect other parts of the body from unwanted side effects.

In a new study, published in Pharmaceutics, researchers were aiming to develop a new inhalable powder formulation that can target drugs to infected macrophages in the lungs.1 The researchers efficiently loaded sodium hyaluronate sub-micron particles with three drugs already used to treat TB – two antibiotics, rifampicin and isoniazid, and an efflux transporter known as verapamil. They then used spray drying to transform these into highly breathable microparticles – and showed they can regenerate back to their original size upon contact with water and release the drugs in a slow, sustained manner.  Finally, they showed that two different formulations – either with or without verapamil - showed antimicrobial activity. They both showed powerful bactericidal effects against antibiotic-susceptible Mtb – and importantly, they were also effective on drug-resistant strains. The researchers used ultrapure water generated from an ELGA Purelab® Flex laboratory water purification system for their experiments, reducing the risk of introducing contaminants that may affect their results.

These results show the promise of this new platform for the delivery of antibiotics directly into the lungs for the treatment of Mtb infections, irrespective of their drug resistance profile. The main advantage of the encapsulated formulations is that they can reach, deposit and concentrate high drug doses within infected macrophages. It has the potential to cause fewer side effects, which is an important factor for long-term treatments. The next steps will involve optimising drug concentration to maximise the effectiveness of the formulation with the lowest possible toxicity profiles – followed by further validation and confirmation both in vitro and in vivo.

We are the LabWater Specialists, for over 80 years we have been working with scientists to guarantee pure and ultrapure water for their research and lab work. Laboratories around the world trust our water purification systems to assist their researchers to achieve accurate, reliable results.