Life in The Lab
Cool Science

The Analytical Chemistry Of Wine! 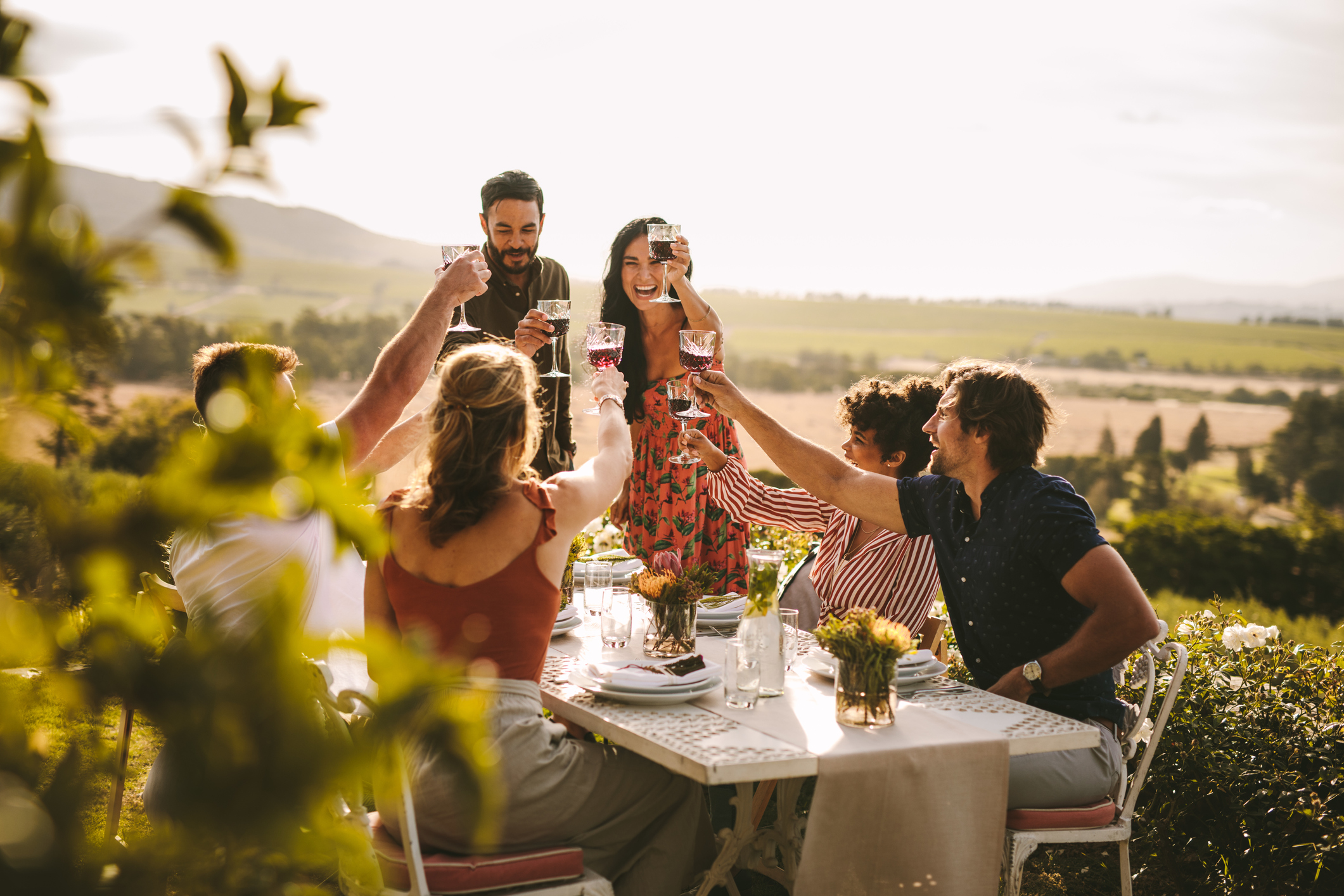 Wine (from Latin vinum) is an alcoholic drink made from fermented grapes. Grapes ferment without the addition of acids, enzymes, water, or other nutrients as yeast consumes some of the sugar in the grapes and turns it to ethanol and carbon dioxide.

Wine has been produced for thousands of years. The earliest chemically attested grape wine was discovered at Hajji Firuz in the north-western Zagros Mountains, ca. 5400 BC. Wine reached the Balkans by c. 4500 BC and was consumed in ancient Greece, Thrace and Rome. Wine has long played a significant role in religion. It was used by both the  Romans and the Greek cult of Dionysus in their Bacchanalia. Red wine was associated with 'blood' by the ancient Egyptians.

Wine is a blend of water, sugar, organic acids, various ions and ethanol along with many other compounds including glycerol, aliphatic and aromatic alcohols, proteins, yeasts and polyphenolics which contribute colour, aroma, flavour and tannins.

Modern winemaking uses a combination of traditional methods of production and up-to-date techniques to optimise processes and ensure quality. Relatively rapid methods of chemical analysis are required for process control. 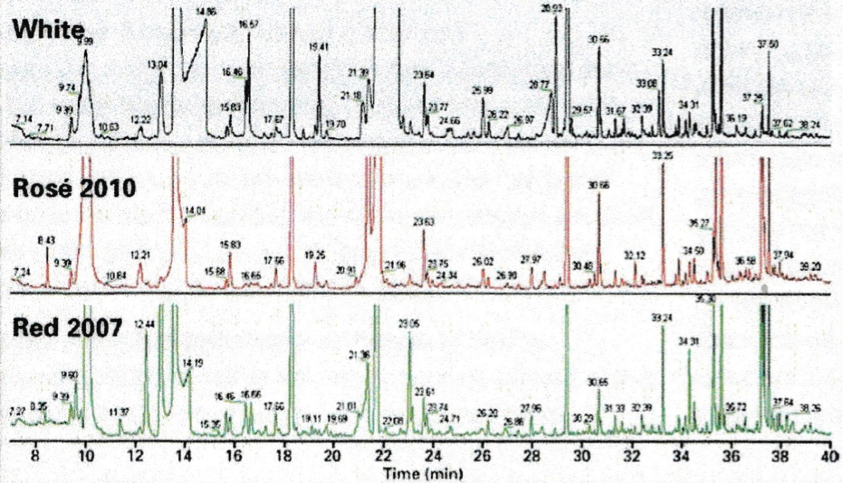 The three traces above show the full scans of samples obtained by solid phase extraction of 10ml wine samples. The technique can detect, among others, volatile phenols which can depreciate quality, geosmine and haloanisoles (linked to the presence of mould) and methoxypyranzines, which are wine maturity markers. In some cases, GC/MS can detect lower levels of contaminants than by taste. An example is shown below for the determination of geosmine. 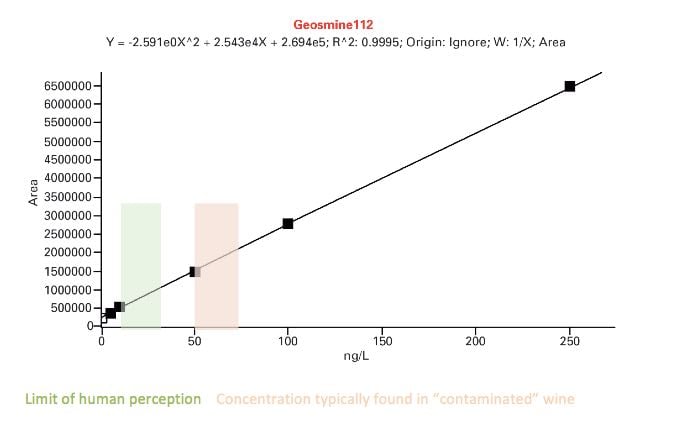 The most prevalent type of 'wine fraud' is one where wines are adulterated, usually with the addition of cheaper products.

For example, colouring agents such as elderberry juice and flavourings such as cinnamon and sweeteners are used to mimic the deep, dark colour and flavours of spices due to the presence of different phenolic compounds found in the skin of the grapes.

Counterfeiting and the relabeling of inferior and cheaper wines to more expensive brands is another common type of wine fraud.

Detecting 'Wine Fraud' In The Lab

While standard analytical methods such as GC/MS, LC-MS/MS and ICP-MS can provide a detailed analysis of wine compositions which can be used for detection of fraud, stable isotope ratio analysis (SIRA) has been particularly successful for this purpose. 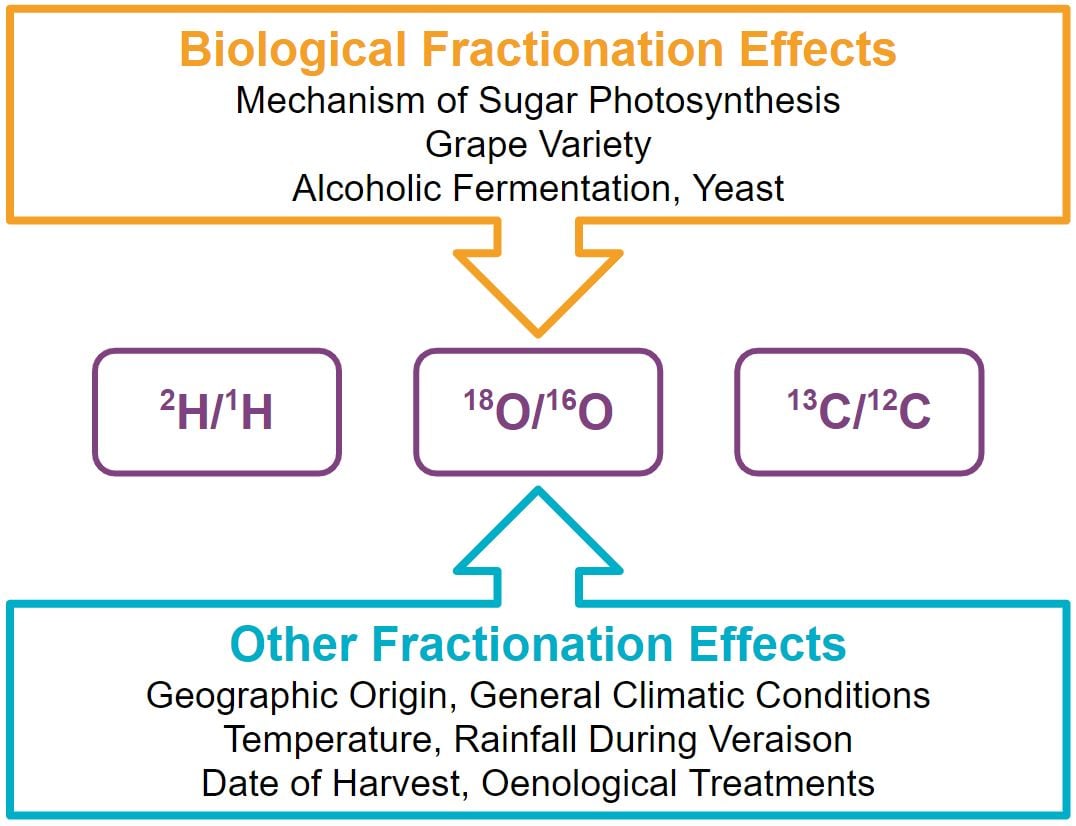 Authentication of wine by SIRA is based on the measurement of the ratios of the stable isotopes of carbon (13C/12C), hydrogen (2H/1H), and oxygen (18O/16O) within molecules and between different molecules. The distribution of isotopes in bio-molecules of sugar, organic acids, water, or fermented components like ethanol and glycerol is controlled by different fractionation processes as shown above.

The results of these processes are stable isotope patterns which are characteristic for a specific year of vintage or geographical origin of a grape or wine. With knowledge of the mechanisms responsible for such patterns, an expert interpretation of stable isotope data concerning authenticity or adulteration is feasible. 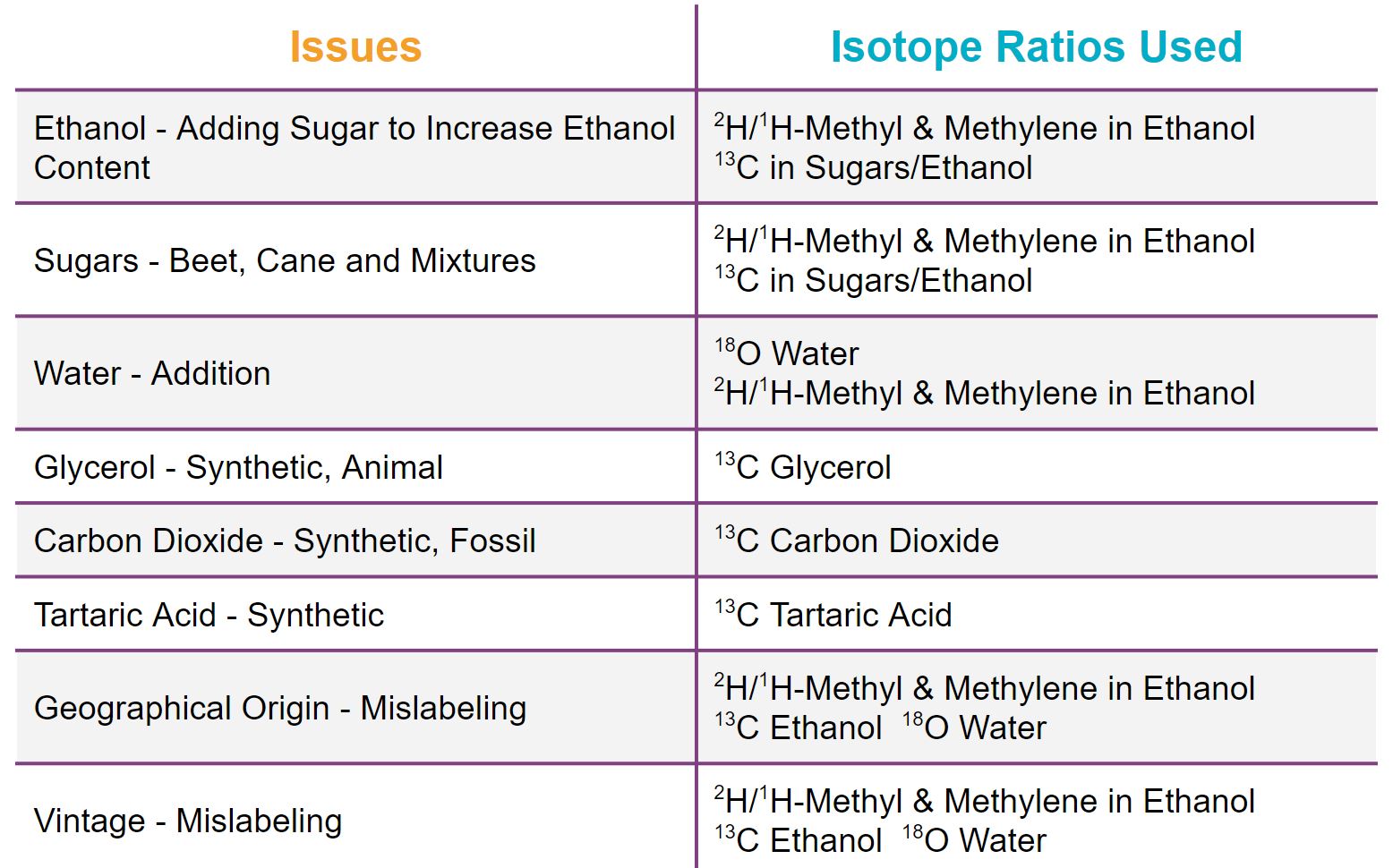 The table shows the isotope ratios often used to investigate various aspects of wine authentication.  For example, the addition of sucrose from sugar beet before fermentation to boost alcohol content can be detected from the 2H/1H ratio in the methyl and methylene groups in the ethanol in the wine. About 85% of the deuterium in sugar is transferred into the methyl hydrogens while 75% of the deuterium in grape liquid goes into the methylene hydrogens.

These methylene hydrogen atoms are also closely related to the geographic and climatic background of the grapes.
1H-Nuclear Magnetic Resonance (1H-NMR) analysis of wine provides quantitative and highly reproducible information and is therefore well suited to the authentication of wine. The combination of 1H-NMR fingerprinting (profiling) with multivariate analysis (“Wine screener”) has already shown promising results for grape variety verification or other specific issues of authentication like geographic origin.

In this respect, it is reasonable to use both 1H-NMR and SIRA, e.g. for a cross-validation for specific issues of authentication.

Clearly, the wine drinker can relax in the knowledge that modern analytical chemistry has been applied extensively in ensuring his drink is as safe and flavoursome as he can expect for what he has paid!


Further reading about the analytical chemistry of winemaking: